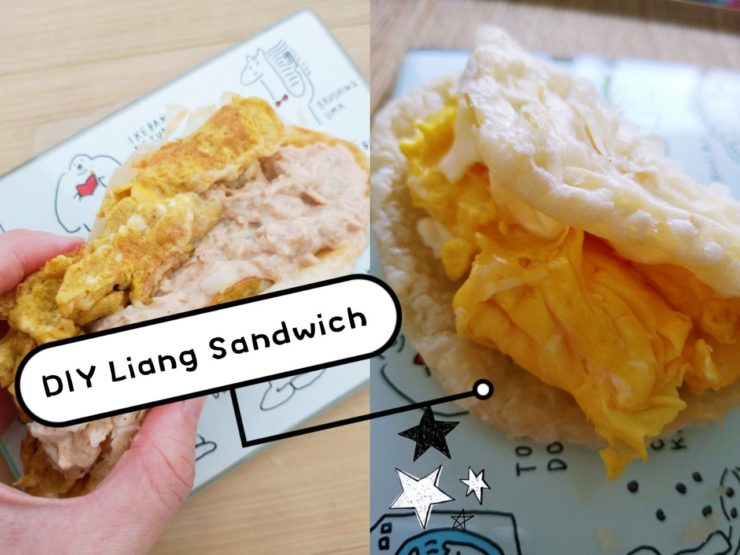 I felt pretty sad when Liang Sandwich Bar suddenly closed all their stores because I had really wanted to try it!!!

Update: They are opening again in the fourth quarter of 2020!!! With new menu offerings!!!

Can’t stand that I lost the chance to try this spring onion pancake sandwich my idol endorses, so I decided to study the menu online and make my own NAF Sandwich. NAF stands for Not a Foodie by the way, so don’t blame me if you follow the recipe and it doesn’t taste as nice as Liang Sandwich! I’m very simple-minded when it comes to food – if it satisfies my tastebuds and is value-for-money, it is good enough for me!

I chose the Tuna Mayo, $4.90 and Cheese & Egg, $3.90 flavours to recreate because I have all these ingredients at home. I only lack having the scallion pancake, so I went down to NTUC to get this.

This is so great for a hearty (and cheap!) breakfast! It was very fast to make with minimal washing up.

What I like about Chinatown frozen prata is that it is not as oily as pratas sold at prata stalls, so it’s perfect for making a sandwich like this. You can add anything you like in this prata sandwich because it adds as such a good, non-heavy sandwich base!

This Onion prata is very crispy and fluffy and really does have the fragrant taste of onion!

The only thing is that it is actually kind of small. It looks smaller than Liang Sandwich Bar’s scallion pancakes, but it’s not a problem because after adding the fillings for the sandwich, it is really rather substantial!

Actually, I got inspired to make these Taiwanese sandwiches with a prata because when I read the reviews, they all wrote that it looks and tastes like a prata.

I’ve never tasted Liang Sandwich‘s scallion pancakes before. They do have some very loyal supporters so they are probably delicious. When it reopens again (new name will be Liang Crispy Roll), I hope I will remember to visit it. I heard that their soymilk is very nice. Will do a review when it reopens!

In the meantime, let’s enjoy these DIY Liang Sandwiches!